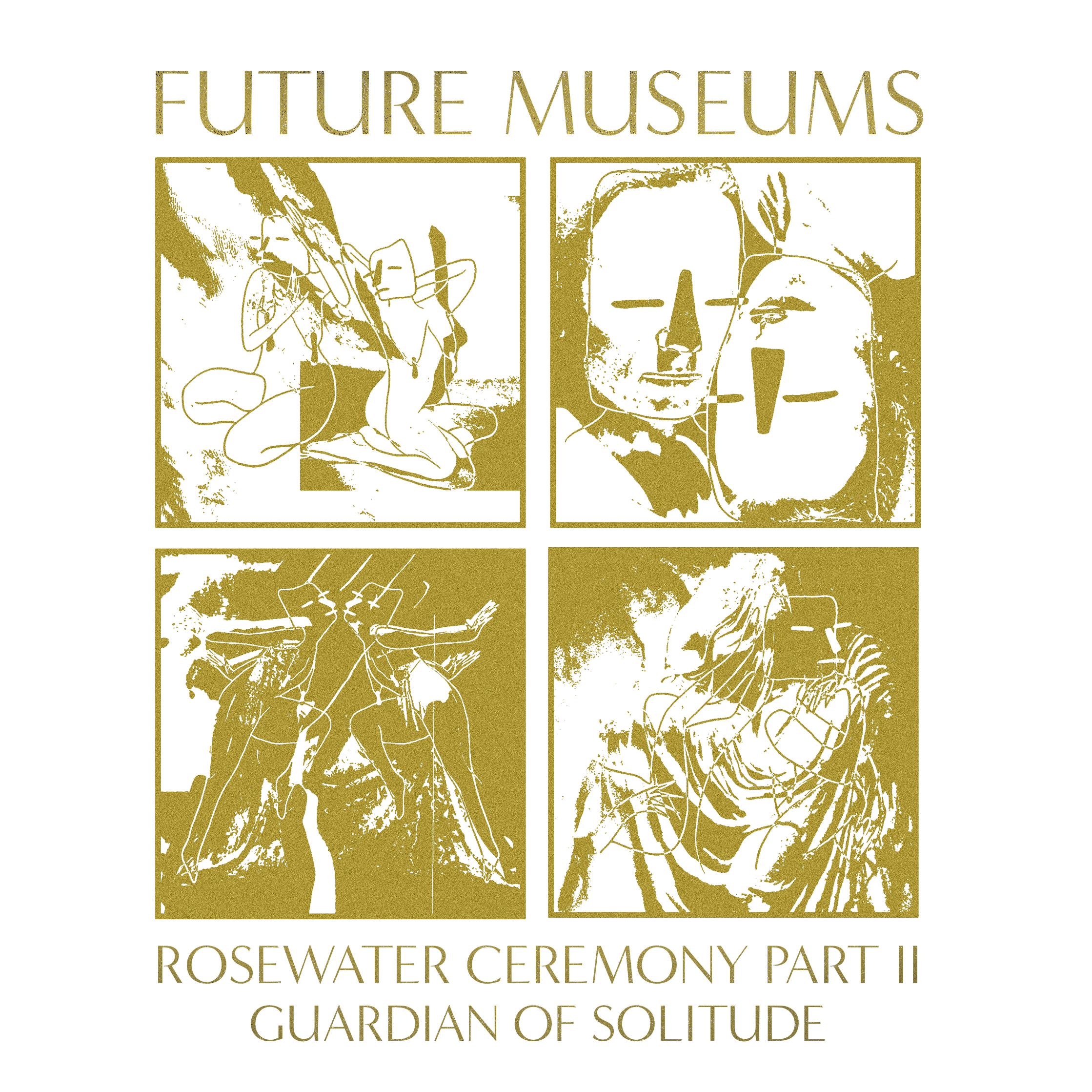 Founded in 2012, Lord has an impressive catalog of wide ranging solo and collaborative albums under the moniker Future Museums. Lord recorded Rosewater Ceremony Part II by himself in 2017 immediately following Rosewater Ceremony using the same set of gear in his home studio. On this round of inner explorations and mental projections, Lord expands his emotional palette beyond the ubiquitous bliss of the first Rosewater Ceremony to include a dimension of empathetic consciousness. Gently pulsing percussion and bass sequences materialize into tastefully reserved rhythm sections, guiding Lord’s solemn guitar leads through the vast swells of atmospheric strings and shimmering trails of cosmic dust. Future Museums plunges deep into electronics for the Rosewater sessions, embracing drum machine, sampler and analog synthesizer as the primary voice. Future Museums has always forged a uniquely trance-inducing realm of sound manipulation out of a remarkable mix of intuition and technique, and now Lord has expanded his vocabulary both emotionally and tonally while continuing to preserve his essential center.

Guardian of Solitude is the pursuit of a fundamental connection to the inner muse and acceptance of the ever-changing external landscape. Lord continues to advance and refine his approach to composition and arrangement while savoring the rich sonic sphere he has lovingly cultivated. Elastic and buoyant arpeggiators melt through hypnotic cycles on “Housewarming” while swimming through a choir of vocal-like synth “Ahhh’s”. Lord playfully introduces melodic motifs that become fully engulfed by waves of warm tones only to gracefully reappear on a new instruments. Striding tom drums and contemplative bass transport “Position the Inverse” into Lord’s wistful, effects soaked guitar work that serves to tenderly calm the tidal turbulence of the psyche. There are many moments of pure innovation across the seven tracks such as the completely improvised “Closed Eye” recorded live in one take while blindfolded, alongside stints of careful architecture like the network of dancing rhythmic textures on “Presidio”. Future Museums is an evolving form of art that has began to unfurl it’s dynamic potential and reveal a truly inspiring presence of greatness that is perpetually ascending.

Rosewater Ceremony Part II: Guardian of Solitude dissolves the barriers and noise of the physical environment and reignites the monologue within. Lord has elegantly sculpted a pristine embodiment of his own mind and anointed Future Museums as an enduring protector of solace.

“The point of love is not to create a quick commonality by tearing down all boundaries; on the contrary, a true love is one in which each partner appoints the other to be the guardian of their solitude, and thus they show each other the greatest possible trust. A merging of two people is an impossibility, and where it seems to exist, it is a hemming-in, a mutual consent that robs one or both parties of their fullest freedom and development. But once the realization is accepted that even between the closest people infinite distances exist, a marvelous living side-by-side can grow up for them, if they succeed in loving the expanse between them, which gives them the possibility of always seeing each other as a whole and before an immense sky.”